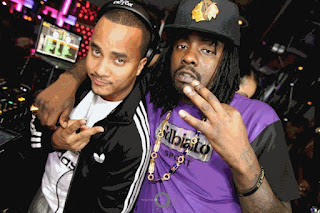 DJ Quicksilva Joins Forces with Maybach Music Group
Recording Artist Wale
Continuing to Prove why he is the East Coast’s Number One DJ!

Hanover, MD (Monday, June 11, 2012) – For over a decade, DJ Quicksilva has been one of the most consistent and dedicated DJs. He is a master of his craft and every time he gets behind the booth that is recognized. Most recently DJ Quicksilva made a huge announcement that he will be doing special show dates with Maybach Music Group’s own Wale. With this new venture, DJ Quicksilva will continue to blossom and will solidify what “hard work” truly means.

DJ Quicksilva is a staple in the DMV (DC/MD/VA) area and entertainment scene. From being a radio personality on WKYS 93.9 FM, to making appearances on BET’s 106 & Park, to Spinning in Cancun for Memorial Weekend, being an official Ciroc Boy and upcoming Official DJ of Radio One’s “Radio-One Fest” (starring Young Jeezy, TI, Wale, Fat Joe & Ice Cube + more), DJ Quicksilva is your go to man to make it happen! In addition you can see DJ Quicksilva spin weekly in Washington, DC as he is the resident DJ for the following parties: Tuesday at Opera, Wednesday at Josephine’s, Thursday at Park and Fri at Lux. You can also catch DJ Quicksilva’s Syndicated Mix Mon-Thurs on the Russ Parr Morning Show & Quick Mix Nightly on 93.9 WKYS or www.kysdc.com.

When asked about his success, DJ Quicksilva has these words to share: “I'm an example that never let where you come from or what you been through stop you from following your dream". I'm a guy from East Baltimore who's been shot, locked up, caught up in the streets, lost both parents by the age of 18 but still made it out the hood. If I can anybody can if you want it bad enough; and never give up or listen to the naysayers who say you can't do it”.

In DJ Quicksilva’s own words: “Hard work, Dedication & Consistency will equal success but you have to do all 3 all the time”.

If you are interested in booking DJ Quicksilva, please send inquiry to bookings@unrulyonline.com and for media inquiries, please contact Candice at 410.487.8294 or via email candice@unrulyonline.com.