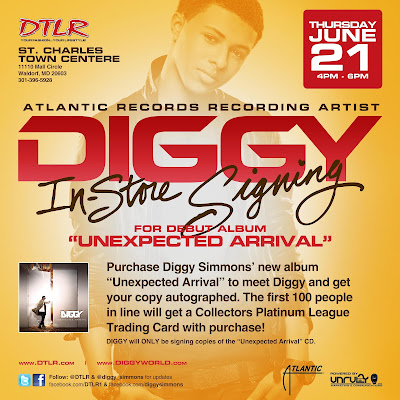 Details:  On June 21st, Diggy will be signing his debut CD titled “Unexpected Arrival” at DTLR. Since the release of his debut album, Diggy has garnered much press with popular MTV.com stating “the teenage rapper unveils his major-label debut, filled with feel-good tracks that prove he can hold his own against more seasoned MCs.” Diggy also was awarded “Outstanding New Artist” at the 43rd Annual NAACP Image Awards. If you would like to meet Diggy, individuals must purchase the album before the in-store or when you arrive. In addition, the first 100 people in line will receive a collectors trading card from  The Platinum League, which is first ever Interactive Hip Hop trading card company.

If interested in requesting media credentials to cover the in-store, please call Candice at 410.487.8294 or email candice@unrulyonline.com.