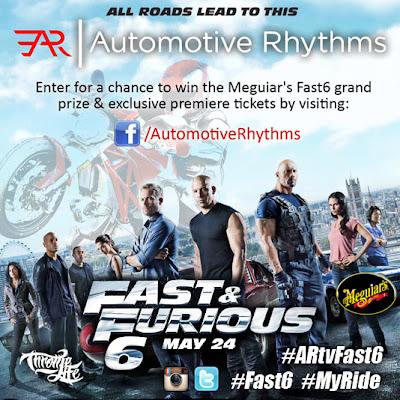 Fast & Furious 6 Promotion: All Roads Lead to This

Very PRoud to announce that CNPR has partnered with Automotive Rhythms for the "Fast & Furious 6" DC promotion! You can enter for a chance to win the Meguiar's Fast 6 GRAND Prize and EXCLUSIVE tickets to attend the DC screening!

Synopsis: Since Dom and Brian’s Rio heist toppled a kingpin’s empire and left their crew with $100 million, our heroes have scattered across the globe. Meanwhile, Hobbs has been tracking an organization of lethally skilled mercenary drivers, aided by a ruthless second-in-command revealed to be the love Dom thought was dead, Letty. The only way to stop the criminal outfit is to outmatch them at street level.

To enter the promo, “LIKE” the Automotive Rhythms facebook page and comment with your best description of what “All Roads Lead To!” Basically, give us your alternative ending. Contestants will be chosen for the Meguiar’s summer supply grand prize as well as 150 lucky winners for the Washington, DC premier May 21, 2013. You can also participate on Instragram by uploading pics of your ride and tagging them #MyRide #ARtvFast6 #Fast6 to possibly be featured on the Fast & Furious IG page!!